The Silk Road: overland trade between east and west Around years ago the first official camel caravan, loaded with silks, wended its way westwards from China to the Mediterranean along what came to be known as the Silk Road.

Silk, horses, spices and other luxury goods were carried by the great caravans. Few traders travelled the whole distance and goods changed hands often in the oasis town bazaars along the way. Nomads provided fresh horses and camels and acted as guides across the mountain passes and through the sand dunes. Eventually, the Silk Road declined with climatic changes, political pressures and the opening up of maritime trade routes.

Today, diesel trucks travel much the same path as the camel caravans of old. Central Asia: the geography Central Asia consists of a great sweep of mountain and steppe, desert and oasis. In the south is a fertile arc conducive to settlement and agriculture, and in the north great steppes best suited to nomadism and grazing.


Central Asia is divided into a western and an eastern sector by the Altai mountain range. Western Central Asia, with which this exhibition is principally concerned, comprises the former Soviet republics of Kazakhstan, Kyrgyzstan, Tajikistan, Turkmenistan and Uzbekistan. Historically and culturally, Central Asia also includes northeastern Iran, and northern Afghanistan, Pakistan and India.

Western Central Asia: the people The people of western Central Asia are a complex ethnic mix, and live by an interactive combination of nomadic and sedentary lifestyles. Majority peoples include the Kazakhs, Kyrgyz, Turkmen and Uzbeks who are descended from succeeding waves of nomads from Mongolia in the north east.

They speak Turkic languages and are celebrated for their remarkable and beautiful textiles. The Tajiks are descended from the original Indo-European inhabitants of the area and speak a Persian language. In addition there are Arabs, whose ancestors brought Islam to Central Asia in the early s, together with Russians, and a range of minority peoples.

Xinjiang consists of a vast desert, the Taklamakan, ringed with oasis cities, home of the Islamic Uyghurs, another Turkic people, who produced their own distinctive textiles and carried the Silk Road trade on to China. Mongolia and Inner Mongolia are the original homelands of the nomads who swept in waves westwards to Iran then Persia or east into China itself. The Buddhist Mongols, like the Kazaks, are nomadic pastoralists, breeding livestock and living in yurts.

As with western Central Asia, nomads and oasis dwellers live together in a sometimes uneasy interdependence. Nomads and oasis dwellers: the interplay of two traditions Over the centuries in both eastern and western Central Asia two distinct ways of living, nomadic and sedentary, have been practised side by side. The relationship between nomads and townsfolk has always been mutually interdependent, but often troubled, characterised by trading animal products for agricultural products one day, raiding and conquest the next.

The distinction between nomads and oasis dwellers has over time become less and less clear. With changing economic and political circumstances, the survival strategies of both groups were prone to overlap and intermingle. Both ways of life are however clearly reflected in their distinctive textiles. In this exhibition you can see some of the typical woollen rugs and trappings produced by nomadic people to support their migratory way of life.

You can also see examples of the silk and cotton textiles made and used by oasis dwellers. Life on the move: the nomads of Central Asia Central Asia was largely populated by wave after wave of nomadic peoples of Turkic and Mongol descent who moved westwards from Mongolia in search of new pastures.

The domestication of the horse was a vital step in this long process. Nomads are dependent on herds of sheep, goats and sometimes cattle for their livelihood. In order to find good grazing for these animals, nomadic groups move seasonally from pasture to pasture, using horses and camels for transport. Traditionally, nomads live in portable felt-covered tents called yurts. A yurt is ornamented inside with a range of highly decorative and functional rugs, partitions, covers and storage bags made of wool from their animals. Nomadic groups interact with the settled populations of surrounding villages and towns, sometimes trading and at other times raiding.

Some nomads eventually settle in permanent homes and blend into the local population, adding their own rich imagery to the existing urban design repertoire. 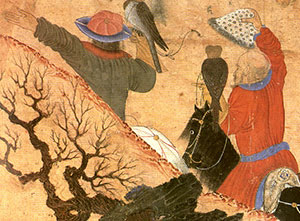 Nomadic women have far more freedom and responsibility than is allowed to the women of the towns. Mainly wool: nomadic rugs and textiles In addition to their tents, nomadic people require a range of portable furnishings to support their migratory way of life. Nomadic textiles are typically made from wool, shorn from the family herd of sheep, goats and camels. These textiles, which are woven, felted and embroidered by women, are often highly decorative.

The designs are passed from mother to daughter and tend to reflect group or tribal membership. Textiles which are surplus to family needs are sold in the bazaar, where silks and cottons for special pieces can be bought. Life in town: the oasis dwellers of Central Asia The mountains and rivers of Central Asia provided land suitable for settlement and farming.


Cotton and silk were primary agricultural products along with grains, fruit and vegetables. Villages, towns and cities, essential staging posts for the Silk Road traffic, grew up around these oases. Culturally, the high point of urban development in Central Asia occurred between and , during and after the reign of Timur. Islamic religion, art and culture flourished and craft guilds were established. For men, life in town tended to revolve around the bazaar, where trade and business were conducted and from which new trends emerged.

Nomads and oasis dwellers met in the bazaar to exchange their wares.

For women, who were veiled, life revolved mainly around the domestic sphere. Silk and cotton: urban weaving and embroidery In the towns and cities of Central Asia, where people live in permanent mud brick homes, the fabrics were mostly made from silk and cotton, two of the principal agricultural products of the oases.

Metal work, ceramics, wood carvings, ivory and jade works, as well as precious textiles bear testimony to this heyday. Gorgeously coloured miniatures from the Mughal period round off the exhibition.

Gold jewelry and the Scythians

Within the field of book art, the museum distinguishes itself through its comprehensive collection of paintings from all four of India's main religions. The art of the Himalayan countries of Nepal and Tibet is represented by fabric painting so-called Thangkas , wood sculptures and bronzes.

The demon-like gods of protection of the 18th century are characteristic of late Tantric Buddhism. The Southeast Asian collection includes stone and bronze figures, glazed clay reliefs, as well as grave finds from prehistoric times 3rd to 1st millenium BC , ceramic vessels, and bronze or glass jewellery.

Beyond the Silk Road: arts of Central Asia – Museum of Applied Arts and Sciences

The heart of the collection, and at the same time the architectural focus of the exhibition, is the world-famous "Turfan collection", named after the first of the four Royal Prussian expeditions to the northern Silk Road, Xinjiang Uygur Autonomous Region, People's Republic of China between and The murals, the paintings on fabric and paper, and the clay and wood sculptures of the 3rd to 13th centuries for the most part originate from Buddhist temples.

The focal point of this section is the full-scale reconstruction of a square temple decorated with original murals from Cave at the oasis of Kucha. Sun - Mon closed Tue - Wed - Thu - Fri - Sat - Current Preview Archive.